good work goh
Getting to the summit is optional, getting down is mandatory...
Top

originaly post by fs:
guys, off topic jap...
segan r nak tanya... but, how to get summit coordinates from google earth?

In January 2006 Garmin launched topographical mapping of the UK for its GPS units. This could mark the beginning of a revolution in the use of GPS in the outdoors. Why? Because with a standard GPS basemap, it is difficult to make an immediate visual connection between the position shown on your unit and your position on a paper map. The detail shown for the type of areas in which we often find ourselves, such as hills, moors, fields and fells, is simply too sparse. More often than not, all you have is a pointer arrow in an empty blank space.

Hence, for much of the time, outdoor users find themselves using the GPS and the paper map as two largely separate navigation systems. This is perfectly acceptable if you have your route pre-loaded into the GPS and are using it to follow from one waypoint to the next. Then you can quite quickly extrapolate where you are on the map, simply by reading the distance to the upcoming waypoint and using this to estimate a rough position. Very often this is more than adequate because, with the GPS, you are homing in on your next waypoint and so you’ll have full confirmation of your position when you get there.

But not everyone is so well organised or indeed wants to use their GPS as a primary route finding device. They would rather pop it in the sack and only get it out if they get lost or want a confirmation fix. They might turn it on at the start of the walk so it records the track followed; this can be very useful if you want a quick and simple way of reversing the route by using the unit’s ‘track-back’ capabilities. But otherwise it’s very much a secondary navigation aid.

I certainly fall into this category of users, being generally quite happy to follow a route using a bog-standard paper map and an occasional reference to the compass. But if you do this and then decide you want an accurate position fix on your map, there’s no quick way to get one. You have to take a grid reference from the GPS and work out where that is on the map in the conventional way: a laborious process which is prone to error – particularly in adverse weather conditions.

In many locations and situations topographical mapping will bridge that gap. It is by no means as detailed as a standard Ordnance Survey map but it does show the 3-dimensional shape of the terrain you are in and key features such as lakes, rivers, spot heights and paths. In many instances, and certainly in hilly terrain where your need for a quick position reference is greatest, there is more than enough visual data to give you a good indication of where you are.

In extremis this could be a lifesaver, because it reduces the chances of error in transfering your position from GPS to map. My hunch, however, is that topographical mapping will lead many a reluctant GPS user into more regular contact with their device. We tested the mapping on a glorious day out in the Black Mountains and, even in those perfect conditions, it was comforting to glance at the screen every now and then and see we were on the right path. In a white-out, that facility would have been a godsend.

So what is topographical mapping?

Essentially it is mapping which displays contours as well as roads, lakes, rivers and tracks. To get this information Garmin has taken highly detailed vector mapping from the Ordnance Survey and taken out data that is not strictly necessary. With vector mapping every item on the map, whether it is a contour, road or shoreline, is described as a mathematical shape rather than being physically drawn (which is the way the more conventional Landranger and Explorer maps are created). This means that these items can be layered, be shown at different resolutions and, where desirable, stripped out completely.

The stripping out is necessary because a fully detailed map would take up far too much memory to load onto a small GPS device. So the trick is to remove as much as possible while still making the map ‘readable’. From our short experience of using the maps in a handful of locations, Garmin have done a pretty good job. A reasonably large tile of mapping of about 20 by 10 miles comes out at around 4MB. With six of these tiles, for instance, you cover nearly all of the Lake District National Park.

In the Garmin product, this Ordnance Survey topographical mapping is combined with routable street level mapping. In theory this means you can use a GPS for in-car navigation from one place to another, although this is without the spoken instructions you would normally expect from such a device. For the moment, however, we’ll leave that function to one side and just concentrate on the maps you would use in the outdoors.

How do you use it?

To use topographical mapping you need a Garmin mapping GPS and the ability to connect it to your PC. If you have not yet bought a GPS we now strongly recommend getting one with the new removable MicroSD disks and a colour screen, as the mapping is much easier to interpret in colour.

The MicroSD disks will allow you to increase the memory on your GPS at relatively low cost (even a very large 512MB one is only £30 or so from online stores). It is perfectly possible to load on map tiles as and when you need them and delete them to make space when necessary. But a MicroSD card (or a small set of them) will save you a lot of hassle and ensure you always have the mapping on the device when you need it.

The mapping comes on a DVD-ROM with Garmin’s MapSource PC application, so do make sure you have a DVD drive before buying it! At the moment the software is only available for Microsoft Windows, but we are assured that a Mac application is on its way. The mapping takes up a fairly hefty 2GB or so on your computer but once there you can easily select areas and download them to your GPS.

We tried out the application and downloaded maps successfully within a few minutes (although copying the 2GB from the DVD took quite a while on our slightly ancient laptop). The MapSource software is reasonably intuitive. All you need do for basic map transfer is zoom into the area of the country you want, select the Map Tool and double-click on the tiles you want to transfer. The selected tiles are listed on the lefthand side with the total disk space they take up shown at the bottom. Once you are happy with your list, you simply click the button to transfer to the device.

On our device (we were using a Garmin GPSMAP 60Cx) the topographical map displayed automatically if one was a available. You can change the level of detail the map displays, but we set it on the highest setting and the map redrew each time quite quickly. The only other major decision is whether to have the map display ‘track up’ (i.e. with your destination at the top of the screen) or ‘north up’. We experimented with both and concluded that ‘track up’ was best as more of the upcoming route was shown. But that is very much a personal preference.

The image above shows the type of detail you will get – in this case on a mountain that will be familiar to many, Helvellyn. You can see that with an accurate fix (a good GPS will give you a fix to within 10m in most conditions) you could see exactly where you were on Striding Edge, for instance (that's the path running across the bottom on the right). 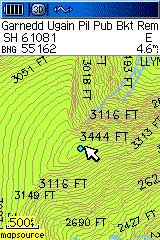 To start with you will need a suitable mapping GPS. If you don’t have one already, the lowest cost one we would recommend is the eTrex Legend Cx, which is available in the Walkingworld shop for less than £290 (including delivery in the UK). This is a superb little unit with a bright colour screen and the new MicroSD memory card capability. It comes with a 32MB card for starters.

Upgrading to a bigger MicroSD card is not expensive at all. We bought a SanDisk 512MB card from an online retailer called MobyMemory for less than £25 including delivery. Others have bought from MyMemory, who seem to have even cheaper deals from time to time and a 1GB card if you want a really big one.

Then the topographical mapping. This comes on a single DVD-ROM and costs just under £150 in our shop (again with delivery in the UK included).

The Garmin software does have the facility for plotting routes but we think you need the greater detail provided by a mapping application with OS Landranger or Explorer mapping. You can get Memory-Map with one sixth of the country at Landranger scale for less than £50. If you want to splash out a bit more, you can get half the country for £120. Memory-Map digital mapping will enable you to plot routes and download ones from Walkingworld, tweak them if necessary and export them direct to your GPS.

All in all then, you can have a pretty comprehensive digital mapping, topographical mapping and GPS capability for £500 or so. A GPS can make route finding so much easier and enjoyable – getting you effortlessly out of those sticky moments when you’re just not quite sure where you are – and potentially be a lifesaver in an emergency, so you might well consider that £500 well spent.